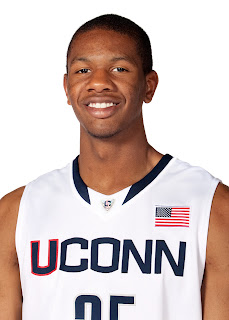 Although Michael Bradley has been granted a release from his scholarship by UConn, it's still possible he'll remain with the program.

One of the main reasons Bradley is considering a transfer is to be closer to his ailing grandmother, who has cancer, in Tennessee. He has already visited Western Kentucky, and both Belmont and Tennessee-Chattanooga have inquired about the 6-foot-10 forward.

UConn has put together a plan that it hopes will help Bradley navigate his way through the upcoming year while remaining a Husky: getting him back to Tennessee every third week, mapping out his classes and workouts for the summer, etc.

Bradley is slated to meet with head coach Jim Calhoun some time today, and could have a decision within the next day or two. Certainly, with Alex Oriakhi, Andre Drummond and Roscoe Smith all gone, there will be a great opportunity for playing time for Bradley, who has yet to play a single second in his two years as a Husky (red-shirted as a freshman, injured this past season).

Meanwhile, the Huskies are obviously focusing much of their recruiting efforts on frontcourt players, with Bradley Hayes and Chris Obepka still at the top of their wish list. Hayes, a 6-foot-11 project who was seen by the UConn coaching staff in Las Vegas and by Calhoun recently in Pittsburgh, appears to be down to UConn, Texas A&M and Georgetown.

Obepka appears more of a long-shot for UConn. Cincinnati, Oregon and St. John's seem to be in the lead, with UConn a distant fourth.

The Huskies are also looking at the JUCO and/or European (German) route. But UConn -- which has 12 scholarship slots for next season (it's still docked one for NCAA violations) -- won't simply fill all the available spots for the sake of filling them. Unless the Huskies can get a marquee player or two, they'll likely save scholarships for the following season, when a bumper crop of top recruits will be available and UConn should be back to 13 available scholarships.